We believe Chinese small caps continue to offer a compelling risk-reward opportunity, as current valuations and earnings growth compare favorably to other small cap markets. Smaller companies in China are at the forefront of the country’s economic shift toward innovation, consumption and services. These businesses tend to thrive in productivity- and value-enhancing industries such as automation, technology and new energy. We believe small caps have the entrepreneurial spirit and flexibility to recognize and respond to changing local market trends, including changing patterns of consumption. Additionally, the Chinese government has recognized the importance of these companies and seeks to support growth in what have been termed China’s “little giants.”

What supportive measures do you anticipate emerging from the Chinese government?

The Chinese government has made it clear that “stability” is a key watchword and policy goal this year, both on the political and economic fronts. Since China has not implemented economic easing over the past two to three years, it has room to potentially deploy both fiscal and monetary tools.

That being said, we’d expect supportive measures by the government to be more targeted in nature rather than an all-encompassing stimulus package. Examples of specific actions could include fixed asset investments, consumption-related tax cuts (both to individuals and corporates), as well as monetary measures such as cutting mortgage rates or increasing mortgage approvals that might help support property market stability.

What about the macro environment? To what degree are China small caps sheltered or otherwise from the inflationary pressures and surging prices of oil and commodities associated with the Ukraine war?

The good news is that Chinese small caps are heavily focused on their domestic markets, and have little direct business operational exposure to Russia or Ukraine. However, despite the lack of significant exposure to Russia/Ukraine, it is difficult to be completely shielded from the negative effects of these larger macro forces. For example, the global risk of inflation, rising rates and higher energy prices could adversely affect sentiment and consumer demand, which would have negative ramifications on growth.

What do you like about China’s small companies right now?

Small businesses continue to be an important driver of China’s economy, accounting for a sizable portion of economic output. Additionally, many smaller companies are well-aligned with governmental policy initiatives such as self-sufficiency across important supply chains, including technology and green energy given China’s move to carbon neutrality. The green energy theme in particular is a very secular one in our view, encompassing opportunities in solar and wind power, electric vehicles (EVs) and the push for creating a smarter electrical grid.

What is interesting about these value chains is that China has, through government initiatives, created a high degree of self-sufficiency in these areas. The technological advancements in this space have driven costs down substantially over the years, which have made these industries more sustainable and less reliant on government subsidies. Thus, we believe there are numerous available opportunities within these themes from which we as investors can pick and choose. Given that these are newer sectors, many companies are just starting out in commercializing their businesses and are naturally smaller in size, making them well represented in these areas. With China manufacturing the majority of the world’s solar components, longer term we see a significant potential global market for these smaller companies. 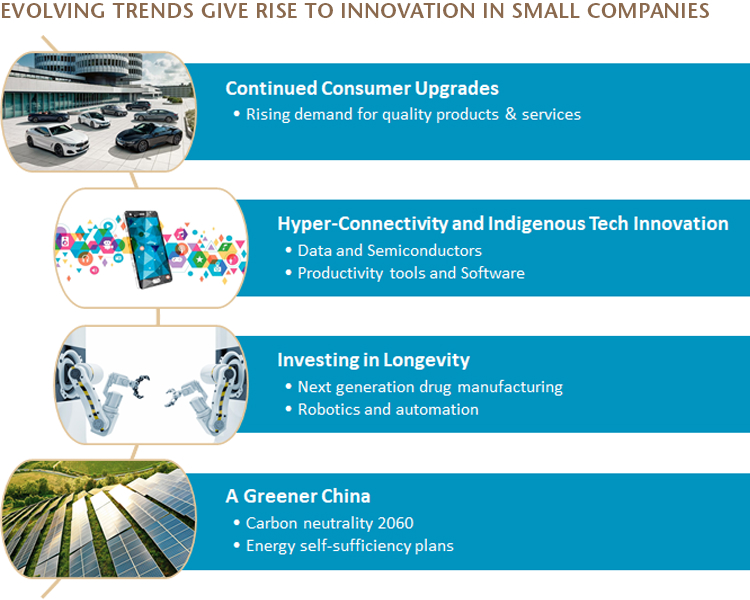 What are your thoughts on semiconductor-related opportunities which experienced a sell-off earlier this year?

We believe that after the recent sell-off of semiconductor companies, now is a good entry point opportunity for certain quality companies whose stock prices have pulled back. Pre-sell-off, we had suspected that a healthy correction was possible given these companies’ high valuations. Due to the U.S. limiting technology exports to China, the current environment will likely necessitate more government support for import substitution efforts to ease China’s external dependencies. One concern for this sector comes from the potential for the U.S. to further restrict China’s access to U.S. tech content—such as high-end chips or advanced manufacturing semiconductor processes—which would weigh on the sector in the short term. Longer term we remain cautiously optimistic that despite the challenges, these politically centric issues will eventually be resolved.

How do you see the earnings outlook for China small companies?

Fundamentally, it is encouraging. Many small caps still have robust secular growth drivers from which they can benefit. Nevertheless, the geopolitical environment and concerns about rising global interest rates have resulted in equity market performance that is not in sync with earnings growth expectations. Starting in 2021, we have observed that market sentiment and place of listing factors can often outweigh company fundamentals. Longer term, we continue to focus on fundamental earnings capability and feel that the very sizable small-cap universe in China continues to provide the opportunity to find many good quality growth companies that are at an early stage of their development.

Can you share some insight on the value/growth debate from a China small cap perspective?

Within China’s small cap companies, we have not historically seen value stock ownership rewarded, given that market participants often put their focus on growth when investing in these companies. Value investing has worked for short periods, such as the first quarter of 2021 where there was a low-quality, liquidity-driven rally in China small caps (which quickly fizzled). Additionally, looking at quality value sectors such as energy and financials, small cap representation is rather limited.

China A-shares often garner investor interest due to their relatively low levels of positive correlation with other key asset classes. To what extent should this be an issue to consider when weighing exposure to China small caps – particularly in today’s markets?

Investing in Chinese securities involve risks. Heightened risks related to the regulatory environment and the potential actions by the Chinese government could negatively impact performance.

The views and information discussed in this report are as of the date of publication, are subject to change and may not reflect current views. The views expressed represent an assessment of market conditions at a specific point in time, are opinions only and should not be relied upon as investment advice regarding a particular investment or markets in general. Such information does not constitute a recommendation to buy or sell specific securities or investment vehicles. Investment involves risk. Investing in international and emerging markets may involve additional risks, such as social and political instability, market illiquidity, exchange-rate fluctuations, a high level of volatility and limited regulation. Investing in small- and mid-size companies is more risky and volatile than investing in large companies as they may be more volatile and less liquid than larger companies. Past performance is no guarantee of future results. The information contained herein has been derived from sources believed to be reliable and accurate at the time of compilation, but no representation or warranty (express or implied) is made as to the accuracy or completeness of any of this information. Matthews Asia and its affiliates do not accept any liability for losses either direct or consequential caused by the use of this information.