China Is Not Export-Driven

Exports are an important source of low-wage jobs, but otherwise play only a supporting role in China’s economy.

Yes, nearly everything does come from China. But exports contribute relatively little to its economy

It is easy to see why most people think China is dependent on exports. After all, almost everything in your neighborhood shop does come from China. But many of those goods are just processed or assembled in China, adding little value and contributing very little to its GDP. Moreover, exports are a small share of output: most of what China makes, China consumes.

Assembled, not really ‘Made in China’

Although the share of China’s exports that are just processed or assembled there has been declining, it still accounts for 38% of the total, down from 50% in 2001.

A good example of processed exports is Apple’s iPad, which is assembled  in China but creates little value there. In 2011, the Personal Computing Industry Center of the University of California, Irvine took apart an  iPad and worked out its value chain.

According to the UC Irvine study, “It is a common misconception that China, where the iPad is assembled, receives a large share of money paid for electronics goods. That is not true of any name-brand products from U.S. firms that we’ve studied...  There are no knownChinese suppliers to the iPhone or iPad...  That means that the main financial benefit to China takes the form of wages paid for the assembly of the product or for manufacturing of some of the inputs. Many components, such as batteries and touchscreens, receive their final processing in China in factories owned by foreign firms. Although hard facts are scarce, we estimate that only US$10 or less in direct labor wages that go into an iPhone or iPad is paid to China workers. So while each unit sold in the U.S. adds from US$229 to US$275 to the U.S.–China trade deficit (the estimated factory costs of an iPhone or iPad), the portion retained in China's economy is a tiny fraction of that amount. . . around US$10.” 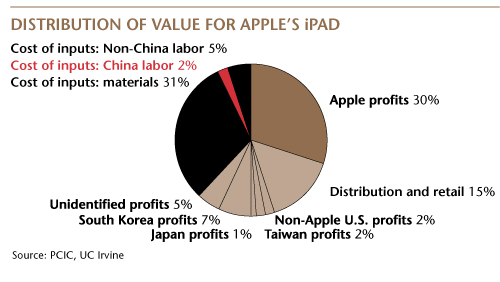 You may remember from Econ 101 that GDP = investment + consumption + exports minus imports. This formula, which applies to all economies, is designed to ensure that GDP excludes, for example, the value of a hard drive that is made in Japan, imported into China and snapped into an iPod, which is then sold overseas. That hard drive cost US$73 (back in 2005, when Apple still used hard drives) and accounted for half of the factory value of an iPod, but it was not made in China and did not contribute directly to the Chinese economy. The indirect contribution—including the jobs for the assembly and testing of the iPod—added up to US$3.70 and was counted in the net export calculation.

During the decade prior to the Global Financial Crisis, China averaged about 10% annual GDP growth, with net exports contributing only about 1 percentage point of that growth. Today, China is even less dependent on exports. Last year, net exports actually posed a -4.4% drag on GDP growth, and in the first quarter of this year, net exports left a -19% contribution to growth. 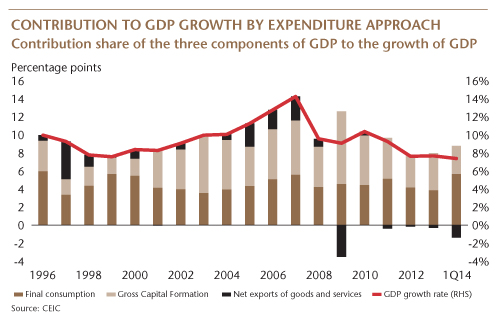 From the perspective of GDP, as opposed to GDP growth, net exports also play a relatively small role. In 2007, net exports accounted for 8.8% of China’s GDP, but this share fell to only 2.4% in 2013. Additionally, we estimate that only about 10% of China’s industrial output is exported, with 90% consumed domestically. (It is also worth noting that last year, 47% of China’s exports were produced by foreign firms.) 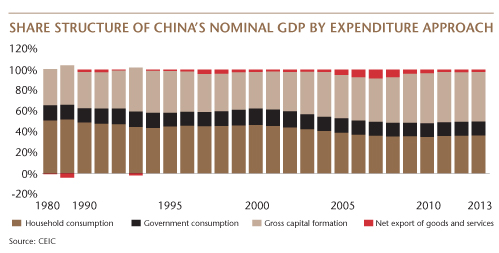 The following chart shows that China’s consumers also do not pay too much attention to the health of the nation’s exports. 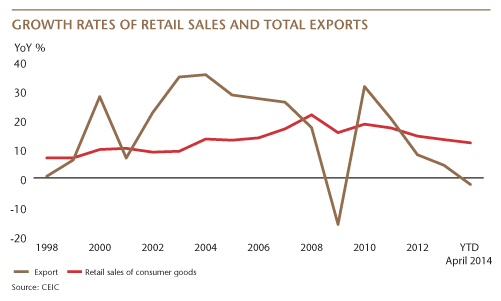 Our message is not that exports do not matter. They do, especially to the tens of millions of workers assembling iPads and other gadgets. But it is important to understand that China is a continental, domestic investment and domestic consumption-driven economy, where exports play only a supporting role. The overwhelming majority of goods made in China stay in China.

When, in 2009, China undertook the world’s largest Keynesian stimulus, it was because as many as 30 million workers lost their jobs as the Global Financial Crisis hit and demand for goods, including Chinese exports, collapsed. Today, however, while the Chinese economy is growing more slowly, the job market remains stable, which is why there has not been significant stimulus.

The final topic we want to explore today is the competitiveness of Chinese manufacturing.

Manufacturing wages have risen rapidly in China for many years, and at a faster pace than in most other developing economies. According to the International Labor Organization (ILO), Chinese wages roughly tripled over the last decade, driven in large part by government policy: over the past decade, the minimum wage rose 196% in Shenzhen, and 187% in Shanghai. And as an example of how important China is to Asia, the ILO estimates that in 2011, real wage growth in the region was 5%. But without China, regional wages declined by 0.9%.

What has been the impact on Chinese exports? Since the end of 2004, the renminbi (RMB) has appreciated by 41% in real effective terms, and the minimum wage in Dongguan (a key export-processing center in southern China) rose by 196%. In 2004, Chinese goods accounted for about 13% of all goods imported by the U.S. (while Mexico’s share was about 11%). Despite sharp increases in wages and in fuel costs, as well as the benefits of the North American Free Trade Agreement, China remains competitive today, even compared to Mexico. Last year, China’s share of U.S. goods imports rose to about 19%,while Mexico’s share was about 12%. 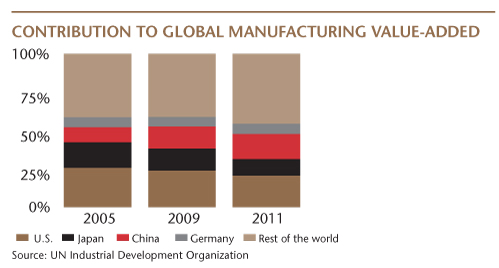 How did Chinese manufacturing remain competitive, despite the rapid wage growth? The answer is that productivity also rose at a very fast pace, in part due to greater investment in advanced equipment. According to the International Federation of Robotics (IFR), China’s share of global robot shipments rose from 0.4% in 2000 to 3.7% in 2005 and 13.6% in 2011. The IFR estimates that China will account for almost 17% of global robot shipments this year. Putting that into context, the U.S. share has fallen to 16% last year from 18% in 2005.