China’s economic growth has stabilized at a healthy pace despite a weak property sector, and remains the world's best consumption story.

Three interesting economic trends, each relevant to investors, are clear from China’s first half macro data. First, economic growth has stabilized at a healthy pace despite a weak property sector. Second, driven by strong income growth, China remains the world’s best consumption story. Third, ‘rebalancing’ continues, with consumption accounting for a larger share of GDP growth than investment, and with the services sector bigger than manufacturing and construction.

Slower but still very healthy, with only modest stimulus

First half GDP growth of 7.4% is in line with my forecast for full-year growth in the 7-7.5% range. This is slower than last year’s 7.7% pace, but it is inevitable that China will, on average, grow a bit more slowly every year for the foreseeable future, as a result of the base effects, a shrinking workforce and other factors. Also, 7% is still an enviable growth rate, especially given how large the base has become.

The main impact of this very modest stimulus was to boost business confidence–and the results were tangible. For example, fixed asset investment (FAI) by privately-owned firms rose 19.2% YoY last month, up from 17.1% in May. In contrast, on a YoY basis, FAI by state-owned enterprises (SOEs) rose 14% last month, down from 16.7% in May. Investment by privately-owned companies has risen faster than that by state firms in 51 of the last 52 months. Recent stronger private investment is more likely due to improved business confidence than the modest rise in credit and fiscal spending. 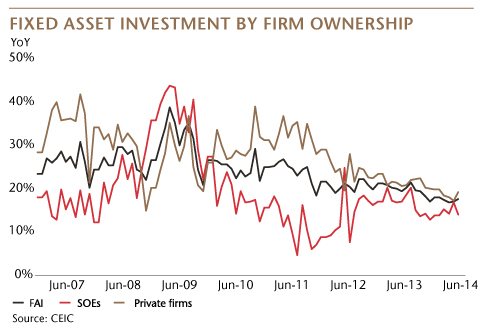 Real (inflation-adjusted) retail sales rose 10.7% YoY in June and 10.8% during the first half of the year. While this is a fantastic pace (U.S. real retail sales rose 1.7% in the first five months of this year), it is down from 11.4% in 1H13, part of the inevitable, gradual deceleration in the growth rates in almost every aspect of the economy, due in large part to the base effects.

Strong consumption continues to be driven by fast income growth. Real urban household disposable income rose 7.1% YoY during the first half, up from 6.5% a year ago. Rural cash income was up 9.8% in real terms, compared to 9.2% in 1H13. Average monthly wages for migrant workers, who move from China’s countryside to staff the nation’s factories and construction sites, rose by 10.3% YoY, fast but down from 12.6% a year ago, while the number of migrant workers rose by 1.8% to 174m. Overall, employment remains stable. 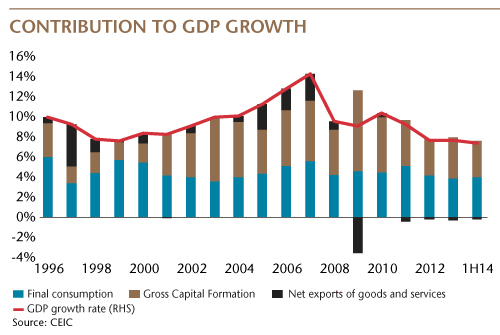 In another important sign of economic restructuring, the tertiary (services) sector was bigger than the secondary (industrial and construction) part of China's economy for the first time last year; and that trend continues this year, with tertiary accounting for 46.6% of GDP vs. 46% for secondary. Additionally, during 1H14, value-added in the tertiary sector rose by 8% YoY, versus a 7.4% rise in secondary-sector value-added.

The property sector remains soft, but I continue to believe the fundamentals are healthy. New home sales (by square meter) were down less in June (-3.5% YoY) than in May (-10.8%), but this is due to the base effect rather than improving sales. For the first half of the year, residential sales were down 7.8%, compared to a rise of 30.4% during the first half of last year.  Keep in mind, however, that sales were down by 11.2% YoY during 1H12, but the market recovered. Weaker growth in residential property investment–up 13.7% during 1H14, as compared the same time last year, versus a 20.8% rise in 1H13–has contributed to slower overall macro growth, and that is likely to continue in the second half.

Finally, it is worth noting that China’s regulators continue to be proactive and put pressure on the trust industry, in an effort to improve risk management. Trust lending in 1H14 was down 63% YoY, and trust loans accounted for only 4% of new total credit flow in the first half, compared to a 12% share a year ago.