China’s economy and society have changed dramatically in recent decades, but there has been little change in the structure of the country’s governance and legal systems - a mismatch that will, over time, result in rising tensions. Last week’s announcement that the Communist Party will reform the hukou, or household registration system, is an important first step toward reducing the contradictions and conflicts in Chinese society. Hukou reform should also boost consumption and raise manufacturing productivity.

Brief history of the hukou

Household registration books, or hukou, have a long history in many Asian countries, including Japan, South and North Korea, Vietnam and Taiwan. Hukou have existed in China for several centuries, as a system to keep track of births, deaths, marriage and other aspects of family history.

China’s Communist Party used the hukou system in support of the planned economy. In the late 1950s, about 85% of the population was rural, and the Party wanted peasants to remain in the countryside, to grow the grain and raise the animals necessary to feed the smaller urban population that was going to establish China’s new industrial economy. The rural population was also expected to be largely self-reliant and was given access to land for farming, but few other benefits.

Holders of urban hukous, in contrast, were assigned a job (there were no private firms) and provided housing, education, health care and pension benefits. Grain was rationed until 1992 and only urban hukou holders received ration coupons, which limited both the cost to the government and the ability of rural hukou holders to survive in the city.

During the 1980s, the Party gradually changed its view on internal migration and began cautiously allowing some rural hukou holders to move to cities. Deng Xiaoping’s early efforts to restructure the economy included establishing “special economic zones” along the coast, which sought foreign investment in manufacturing. These new businesses needed workers. By 1985, about 8 million rural migrants were working in Chinese cities, a number that would rise to 30 million by 1989 and then to 62 million by 1993. 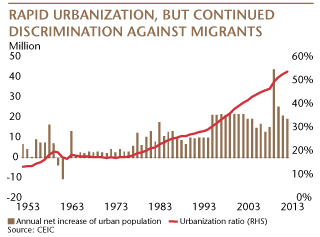 Barriers to internal migration continued to crumble and an increasing number of rural people took advantage of the opportunity to move. By 2012, there were 163 million migrant workers and, adding their family members and some other workers, a total of 234 million urban residents without an urban hukou, accounting for an astonishing one-third of the entire urban population (and equal in size to almost three-quarters of the US population). 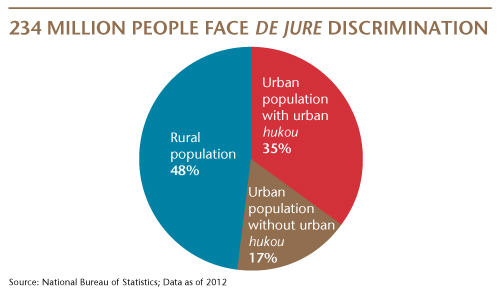 It is not an exaggeration to say that migrant workers are primarily responsible for the dramatic growth of the Chinese economy over the past three decades. In the special economic zones that started the process of China becoming the world’s workshop, migrants accounted for 70-80% of the labor force in the late 1990s. Today, migrant workers account for about 70% of all employees in manufacturing and processing, and 80% of all construction workers. They often take jobs that those with urban hukous do not want to do.

The Party has dramatically raised its spending on social services. For example, in the past five years government expenditure on education rose by 143%, and on health care by 198%. But the huge migrant worker population–and their family members–have largely been excluded from the benefits of this increased spending.

The Party has openly acknowledged the discrimination migrant workers face. A recent study co-written by the Party’s leading think-tank and the World Bank states:

Rural migrants without urban hukous are still denied access to social entitlements—health care, education and housing—that urban residents receive. Migrant workers are also less able to access lucrative employment opportunities in the public and state-owned enterprise (SOE) sectors, and face greater challenges than local workers in accessing decent work even outside these sectors. While nearly all rural and almost 90% of local hukou urban households owned their housing by the mid-2000s, fewer than 10% of migrant households owned housing in their city of residence in 2007.

While the main source of discrimination is the lack of equal access to social services such as education, health care and pensions, studies have found that migrant workers are also disadvantaged by lower wages.

Over the past decade, the Party often acknowledged the need to reduce formal discrimination against migrant workers and proposed some reforms, but there was very little progress. “Reform has been largely symbolic to date,” admits the report by the Party think-tank and World Bank.

Over the past year, however, the Party leadership appears to have recognized the risks of continuing to discriminate against a segment of the population which is both large and vital to economic growth. Pressure to act has been growing: as migrant workers shift from being a “floating” to a more permanent urban population, they increasingly expect better non-wage benefits, including social-security coverage and other urban social entitlements such as free education and social housing that historically have been available only to workers with urban hukous. 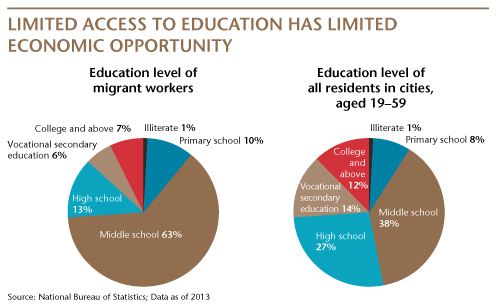 We see the recent social and political turmoil in Tunisia and Egypt as having had a significant impact on the Party’s timeline for hukou reform. The “Arab Spring” made clear the risks of continuing a system that would eventually create a permanent urban underclass, with the children of migrant workers born into a cycle of poverty and limited opportunity due to unequal access to education, health care and other social services.

Given that migrant workers and their families number about 234 million - roughly the size of Indonesia’s population - these are not small risks.

A secondary factor is that in recent years it has become evident that China’s economic boom stage has ended, and everything will be growing more slowly each year, on average, for the foreseeable future. Under these circumstances, ignoring the potential increases in consumption and productivity that could be generated by hukou reform would be a serious policy mistake.

After more than a year of debate and planning, last week the Party leadership launched its program for hukou reform. Only limited details were released, but we expect the program to focus initially on migrant workers who are living with their family members in smaller cities, and the government announced a target of providing urban status to 100 million people by 2020.

It may take several years for this program to cover migrants in the largest Chinese cities, such as Beijing and Shanghai, but the majority of migrants work in mid- and small-sized cities.

Rather than create a process for migrants to convert their rural hukou into an urban hukou, the government will instead base eligibility for urban services on residency permits, which will be tied to a person’s place of residence, not his place of birth or his hukou status.

An important reason for not converting hukous is that those documents are tied to rural land rights, and there were concerns that if a migrant gave up his rural hukou, he might also lose his rural land. Officials last week said that obtaining urban residence status under the new program will not have an impact on rural land rights.

We anticipate the following benefits from implementation of the hukou reform program:

Reducing social instability risks. Launching a complex and expensive reform program is a sign that the new Party leadership is willing to take on big challenges. Hukou reform will also reduce the risk of social instability from the 234 million people living in cities who face de jure discrimination on a daily basis, particularly due to their ineligibility for social services and subsidized housing.

Boosts to labor supply and consumption. Reform of the hukou system may increase the supply of migrant workers in cities at a time when the overall labor force is shrinking, and should improve consumption by strengthening the social safety net for migrants, which will increase transfer payments and reduce precautionary savings.

Productivity gains. Ending the current hukou restrictions should result in higher productivity in manufacturing and construction by reducing worker turnover, and by creating a better-educated workforce. One example of gains from converting temporary labor to permanent staff may illustrate the potential improvements that could result from lower turnover. A multinational company with large China operations told us last year that when they switched from temporary to permanent contract workers, their costs per unit rose by 4.5%, but output per worker rose 27%, accidents were down by half, and consumer complaints attributable to operations fell 30%.