Consumption may be a small share of GDP, but by any other measure China’s consumer spending is strong, with real retail sales up 10% year-over-year.

Household consumption is a small share of GDP, but Chinese are strong consumers.

Household consumption accounts for a small share of China’s GDP: 36% in 2013, down from 46% in 2000. This is quite low when compared to the U.S., where household spending is 68% of GDP, or the U.K., where the share is 64%. The Organization for Economic Co-Operation and Development (OECD) average is 55%, and in India, household consumption is 57% of GDP.

These statistics have led a parade of world leaders and famous economists to argue that consumption in China is weak, and that the Chinese government must take urgent steps to ‘rebalance’ its economy. In this issue of Sinology, however, we will explain why China is already the world’s best consumption story.

By most metrics, private consumption in China is already exceptionally strong. In the first five months of 2014, real (inflation-adjusted) retail sales rose 10.8% year-over-year (YoY), after rising 11.5% last year. During the period from 2005 to 2010, real retail sales increased at an average annual rate of 15%.

Strong consumer spending is also evident when we look at specific categories of goods. Sales of laptops, for example, rose 7.1% YoY last year (by value). That was down from a 24.5% growth rate in 2007, as almost every aspect of the Chinese economy is growing more slowly, in part because the base has grown so large. But Chinese bought 24.4 million laptops last year, more than double the 10 million sold at the faster growth rate six years earlier. By comparison, 17 million laptops were sold last year in the U.S., and sales by value fell 11.8% YoY. 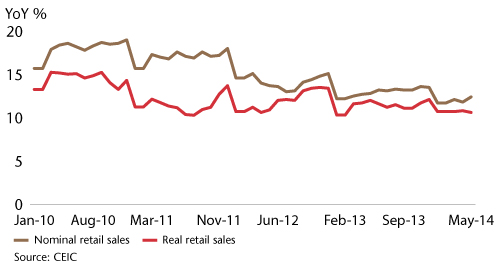 Moreover, as we explained in a recent Matthews white paper on China (‘Separating Fact from Fiction’), if we add household spending on real estate to other purchases—effectively treating it as consumption—private consumption is a significantly higher share of GDP and has remained fairly steady over recent decades.

This strong growth in consumer spending is driven by several factors: healthy consumer confidence; low household debt; rapid income growth; moderate inflation; and growing demand for goods and services from the large number of Chinese who have only recently earned enough money to move into the consuming class—in part through the urbanization process, which allows millions of people to make the transition from subsistence farming to salaried jobs. The proportion of Chinese living in urban areas has risen from 11% in 1949 to 53.7% in 2013, and we expect another 15 million people to make the migration annually for the next few years. 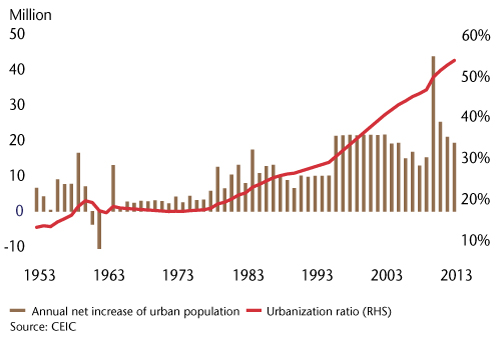 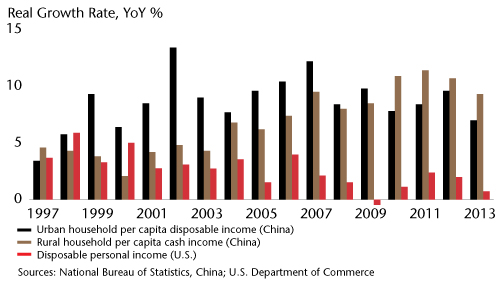 Chinese consumption growth outpaces that of the U.S.

Private consumption is growing more rapidly in China than in other countries. Over the past three years, real growth in consumption averaged 9.1% per year, compared to 1.5% in the U.S. and Japan, and 1.2% in Germany, according to IMF calculations.

And if we convert China’s private consumption into U.S. dollars, the growth in consumption last year was equal to US$528 billion, compared to an increase of US$323 billion in the U.S.

So what’s the problem with consumption?

Analysts who worry about consumption in China do not pay much attention to the data we have just described. They focus instead on the low share of household consumption in GDP, and worry if the economy can be “rebalanced” towards consumption. But they misinterpret the data.

By building out in one decade the modern infrastructure that the U.S. took a century to create, the Party pushed GDP growth up into double digits, with most of that growth coming from investment, squeezing out the share of GDP (or GDP growth) that could come from private consumption.

In other words, the “problem” was not due to weak household consumption: it was because fixed-asset investment (FAI) boomed as the Party built basic infrastructure, manufacturers modernized and construction of privately-owned urban housing was permitted for the first time. FAI rose at an average annual pace of 25.8% from 2003-11, compared to a 12.5% rate from 1995-02.

For those who are waiting for the “rebalancing” process to begin, that day has arrived. China’s transition away from investment-led growth is already underway: after rising at a roughly 25% YoY pace for nine years through 2011, FAI growth has been slowing, and this year is likely to increase by about 16-18%. This slower YoY FAI growth is inevitable, as so much as already been built and the base has become so large, and it means that GDP growth will also continue to decelerate, from 10.4% in 2010 to 7.7% in 2012 and 2013, to our forecast of 7-7.5% this year and 5-6% in 2020.

With GDP growth and FAI both slowing while consumption remains robust, the investment share of GDP will begin to decline and the consumption share will rise. But for investors, there is no reason to wait for that process to play out. China is already a fantastic consumption story.